With These Hands Newsletter

Saúl is now 5. He has been at ESD since August 2009 when he knew next to nothing linguistically. His return to classes after 2 months of summer holiday shows that he has gained linguistically as his older sister who is also hearing impaired has served as a role model.

Saúl’s most recent passion seems to be Jenga. He shows great thought, precision, and facial expression as he frees his block from the tower, places it on top and then takes a seat to watch and wait his turn. 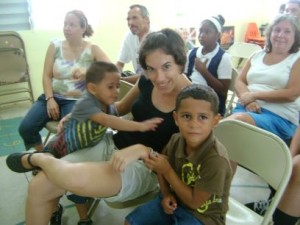 This year, Saúl’s younger hearing brother comes to school with Saúl. Gaby (seated behind and to the left of the Jenga tower) is 3 years old. He has some spoken Spanish as his first language and responds to conversation and commands in Spanish but with two older siblings who are deaf, Gaby has developed a good amount of signing vocabulary.

This year, Jen as accepted him into the classroom with Saúl hoping to develop some good relationship skills as well as adding to the linguistic environment of the two boys.

Saúl is using the language of a three year old. This is an estimate based on how he communicates, the content, intent and variety of expression used. In addition to his signs, he is using a wide variety of non-manual signals including eyebrow lifts and furrows, shrugs, and of course cuteness.

This week, Saúl related a story. It goes like this:

Then there are days like today when he is still an upset little boy. At times like this afternoon, if you can ask the right question, you will get the briefest of nods or head shakes to indicate yes or no. Sometimes, it’s simply a blink.

But he is doing better to communicate and to get past problems more quickly by using words rather than aggression or tantrums. In this photo, Saúl has won the first round of Surf the Bible and has challenged Mizael. Mizael found the requested verse just seconds before Saúl! Pure joy is expressed as he realizes how close he came to winning the day!

Saul loves to fingerspell! He finally saw the letters for SURF THE BIBLE on the yellow surfboard hanging in the chapel. He is looking at words and spelling everything. This is a step in his literacy development – something we work very diligently to see happen. He is writing his letters more carefully and putting together the alphabet puzzles regularly.

Saul’s language is becoming more and more expressive. As a little boy, his interests are varied… today, he shared this with me:

Now, just imagine the possible conversation that came after that revelation! We learned that everyone has underwear and no one was wanting to show it. What will he tell us next week!? 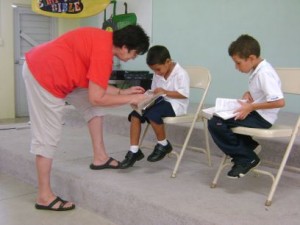 Saul came to me with a part of a tree. “BULL ATE BROKE!” he told me.

“You should guard the tree. Tell the Bull no” I replied.

“SCAREY! NO! BULL SCAREY” he told me with a look of astonishment on his face that I would even suggest a thing like that!

Saúl enjoys participating in our Surf the Bible drills on Wednesdays.

Saúl is noticing lots of intricate details about people. Earlier this fall, Saúl’s sister, Kioney, lost a tooth. Saul saw that his friend Mizael was also missing a few teeth.

One day when our class was talking about feelings and passing around a mirror (to look at our faces as we practiced showing different feelings) Saúl saw his teeth. He said “Kioney’s tooth fell out, Mizael’s tooth fell out…” he looked over the table at his younger brother and continued, “Gaby and me…” and then he shrugged and pointed that they both had all of their teeth.

I asked, “will your tooth fall out like Kioney and Mizael?” Saúl replied, “no, they’re old.”

For Christmas, Saúl received a wooden snake, with the joints that make the toy snake seem real. It also came with markers, so Saúl started to plan out how he would color it. “This purple…. this blue…. this yellow…” and he carefully colored in each area.

Then he drew on eyes.

He studied his snake for a minute and then looked up and said, “oh! Snake doesn’t have a nose!” A purple dot was added, and then snake was complete.

Saúl decided that Jesus needed a birthday cake. He and his teacher made the cake and decorated it. He led everyone in the singing of “Happy Birthday Dear Jesus!” and we were all delighted to sing along.

“Dear God, Larry’s looking for his hairbrush, but he’s bald. Amen.”
This prayer was said by Saúl after being introduced to VeggieTales this morning in chapel.

March 2011 we went to the zoo. Saúl loved the elephant so much. Later, we dressed him in balloons as an elephant and he was able to re-enact the feeding of the elephant!

On May 24, 2011, Saúl received an award for most improved conduct. For real! In his first two years, Saúl has learned to not bite, not kick, not scream when he cries. He has learned to sit in a chair, to do most of his seatwork and writing without fighting and he has learned that words are effective in communicating his ideas and desires.

One day in April 2011, Saúl asked for a piece of cake that he had rejected the day before. On his first request, he was told, “If you take the cake, you must eat it.” He walked away and said NO. A while later, he went back for cake and this time, the lunch room worker gave it to him. He took a bite and decided he did not like it. Then he sat through play time crying because he knew the rule.

So dear reader, the issue was not EAT CAKE! We don’t care if he does not eat cake. We do care that he remember previous events, make decisions, and follow through with them. Eventually he was sent to the classroom. Shortly thereafter, he had a “meltdown” in which he was unable to think or work and was placed in the time out corner.

As he sat there crying, Saúl signed, “CAKE DON’T LIKE. NO EAT. NO WANT.” or something similar to this.

Also in April, Saúl was able to piece together the parts of the Gospel and the life of Christ to understand that without Christ’s salvation, he was not a friend of God. We witnessed him praying with his little hearing brother Gaby “YES JESUS COME TO MY HEART” Pray with us for Saúl’s growth and Gaby’s and every one of the students as they grow to understand SIN and SALVATION and LIVING FOR JESUS.

In May, he was able to choose between, SIT IN TIMEOUT or SIT AND WRITE. He chose to write and we saw the moment of frustration pass without screaming, kicking, biting or crying.

Saúl has come a long way from the timid little boy of the first picture we showed you. He is now able to ask about playing in the water, tell how the water feels, describe the sensation of a little crayfish tickling his feet and explain his plans to mess around with shaving cream. We are excited about what the next year holds in store for all of our students.

In January 2011, Juan Jose became our next in the long line of language learners. Pray with us for Juan’s growth, for his spiritual development and for his future. We are not continuing the saga of language learning from this point but we are prayerful that these examples of how a child moves from nothing to something in language use will enlighten and encourage each reader. Thanks for traveling with us!